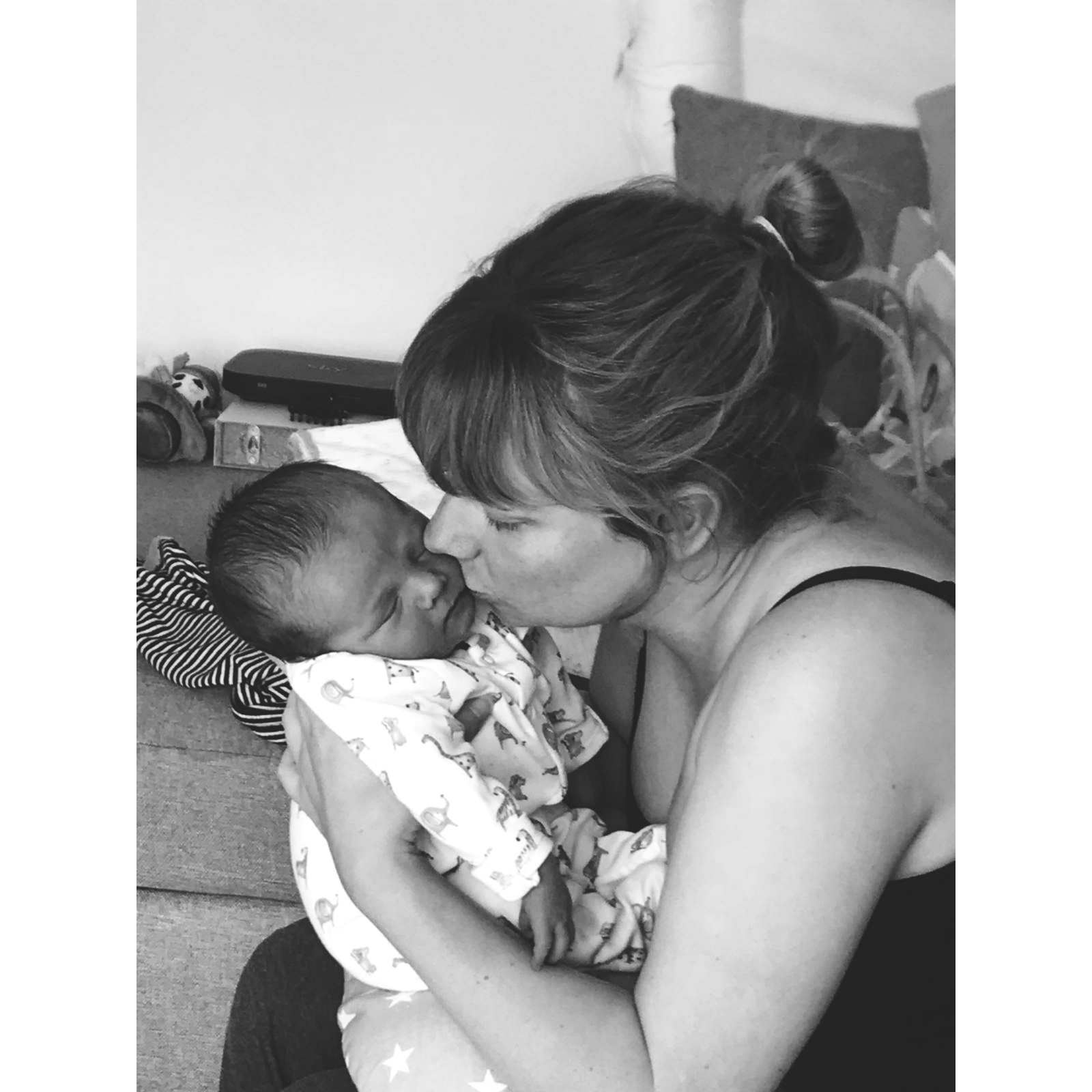 Mama L – ‘With all the anticipation leading up to the birth I was starting to lose hope that I would get the positive, hypnobirthing experience that I hoped for. But in reality the midwives helped us forget the craziness going on in the world and thank goodness we did the Hypnobirthing course with Claire as this really helped us both keep calm throughout the whole experience including the lead up to labour and labour itself!’

Hope you are well and staying safe at home! I’m missing my weekly yoga sessions! First of all thank you for all your help leading up to us having our little boy, it proved invaluable!!

Sorry this is late, been meaning to do it for a while now but here is our birth story for you to share with expected parents.

To say the lead up to my due date was stressful is an understatement! With things changing by the day it was looking less like I would have the birth I hoped for. The maternity unit was shut, visitors were banned and birthing partners were limited – there was a lot of tears! So myself and my husband isolated at home for 3 weeks without going anywhere, other than our daily walk and without seeing friends and family. This was very difficult but the unknown proved just too risky! It also gave us time to get everything ready and I cracked out my puzzle collection and binged on Netflix series’.

My due date was Tuesday 7th April which went by without any signs of baby’s arrival. So I was booked in for a sweep the following Tuesday – up to this date I tried everything; walking twice a day, eating a hot curry (which I never usually do) and walking up and down the stairs. But still nothing, so I had my sweep which wasn’t bad at all! The following day I continued to stay as active as possible – late afternoon I was on my hands and knees cleaning the bathroom floor and I started feeling some period like cramps. I started recording these from 3:30pm. We didn’t fancy cooking so ordered some food whilst continuing to record the tightenings. I still didnt believe that these were surges until later that evening when they ramped up!! It got to 1am and they were longer and closer together so we decided to call the hospital. I tried to hold off as long as possible by using the Hypnobirthing breathing techniques and visuals. The up breathing was great at this stage! The hospital recommended we come in for an examination. My husband dropped me off at the women’s unit and I made my way up to the delivery suite alone due to the restrictions with visitors. At this point I was only 2-3cm dilated so was sent home to try and sleep.

However, as soon as I got home I was sick as the surges had become pretty strong by then. My husband ran me a bath and I spent some time trying to relax and breathe through the surges. At 4:30am we called the hospital again as they were now 3 minutes apart lasting 60 seconds. We were told to come in – I made sure I told them I would like a water birth as I knew they only had one on delivery suite at UHW. Again my husband dropped me off and I made my way up which at this point was pretty difficult as I was still being sick. I was examined and was 4cm dilated which meant I was in active labour – at this point my husband was allowed to join me. I was so lucky to be given the only room with the birthing pool which eased my anxieties!

As soon as my husband arrived I got into the pool, we dimmed the lights, switched on candles and put the Hypnobirthing music on. The midwives were fantastic and were fully supportive of our Hypnobirthing plan. At around 7am I started struggling as the surges had really intensified. I was starting to lose it at this point and requested pain relief. My husband knew my birthing plan and continued to redirect me back to the Hypnobirthing techniques and I was given gas and air. After about 45 minutes of using this I knew my body and I had started to feel like I wanted to push. The midwife reassured me that this could be due to baby being back to back. Even so I asked for an examination to be told that I was actually fully dilated and ready for the pushing stage – we couldn’t believe how quickly this had gone! All the techniques had got me to this point with very little pain relief. I tried lots of different positions including getting back into the birthing pool. However this seemed to slow things down which was strange as it helped in the first stage of labour massively. Eventually after about 2 hours of pushing the midwife suggested that I might need a doctor to help get the baby out. This gave me the final motivation I needed to get the baby out as I really didn’t want any interventions after coming this far. Finally at 11:21am our baby boy was born! I decided to have delayed cord clamping which was the perfect opportunity for skin to skin contact. I knew that this time was precious as my husband would soon be asked to leave. We had a couple of hours together which allowed me to have a shower and have something to eat. I was then transferred to the postnatal ward which was when my husband left. However due to the birth going very smoothly I was allowed to go home a couple of hours after.

With all the anticipation leading up to the birth I was starting to lose hope that I would get the positive, hypnobirthing experience that I hoped for. But in reality the midwives helped us forget the craziness going on in the world and thank goodness we did the Hypnobirthing course with Claire as this really helped us both keep calm throughout the whole experience including the lead up to labour and labour itself!

Hypnobirthing made all the difference to my experience of birth.