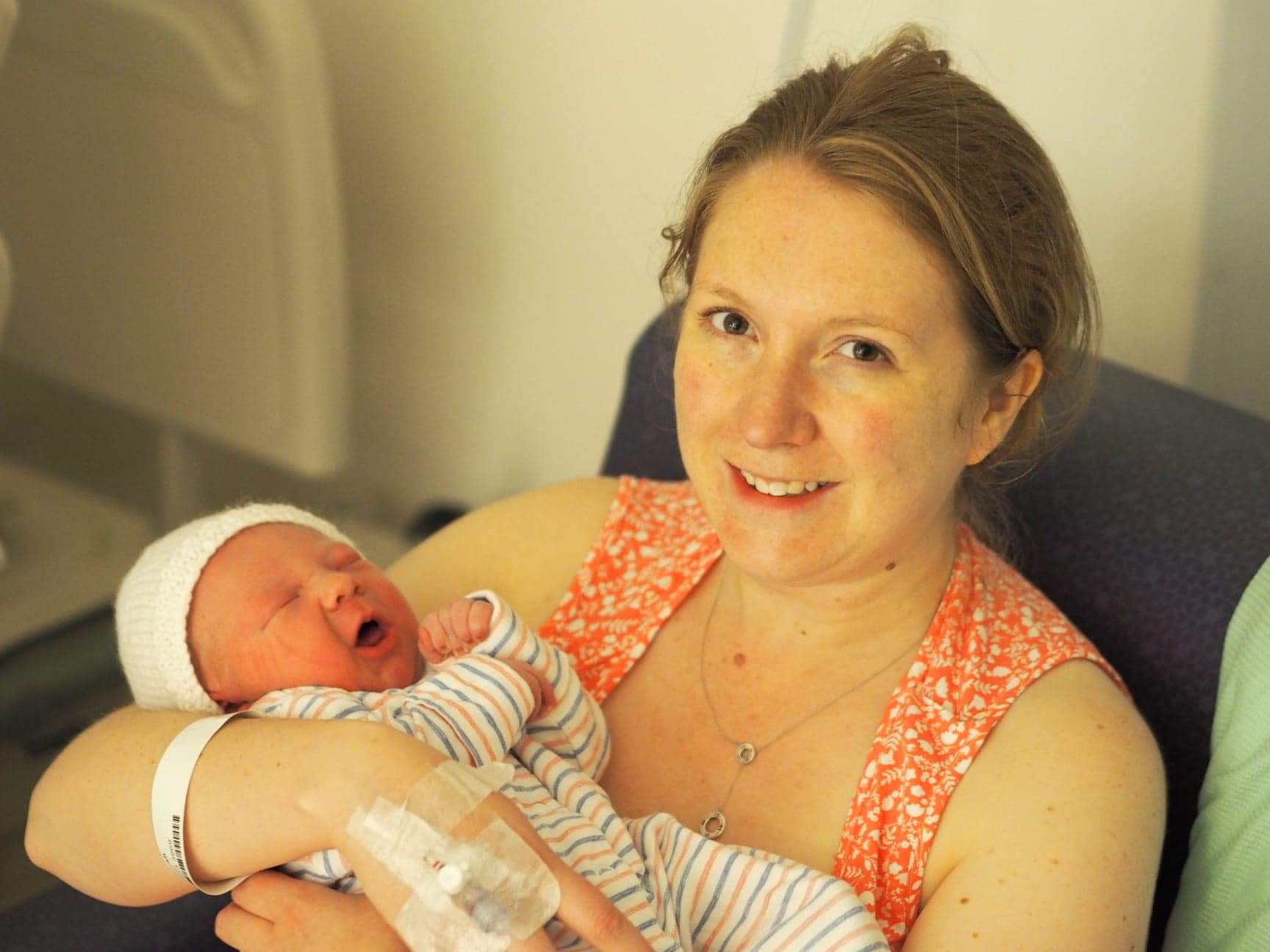 Mama D – “I was very pleased with all my choices. I never felt panicked or concerned and the Hypnobirthing came in very handy. My partner found the same.”

Our little boy was born Saturday 23rd May at 11.15pm – 45 minutes early for his due date and not late like we were expecting!

We had originally planned for a hospital birth in the midwife led suites at the Heath but when those were closed and the visiting restrictions came in due to Covid 19 we decided to do Hypnobirthing with you so we’d feel more in control. Your course also made us think differently about the birth and we decided to organise a home birth with a birthing pool.

At 1.30am Saturday morning I woke up with a minor dull ache like you get with a period. I went back to bed but by 2.30am I could sense peaks and troughs in the ache and thought this was probably labour. I woke my partner and let him know. I downloaded the Freya app and started tracking the surges. I tried to sleep again but it was hard to do both. Instead I listened to some of the Hypnobirthing scripts and started my up breathing.

My partner went downstairs to sort out the pool and I had a shower before putting the tens machine on. I was relaxed and feeling good even though I’d only gone to bed at midnight.

At about 4.30am I moved to the pool. My partner had the piano music from the Hypnobirthing mp3s playing and it was really relaxed. We carried on in the pool for an hour and then I got a bit chilly so headed back to bed with the tens machine. I felt a bit sick from the hormones and vomited the fruit tea I’d just drunk but was prepared with a bowl!

Once the pool was back to 37 degrees I went back in and we called the midwife to see if they should come. We had rung a couple of times for advice and my contractions were feeling regular and increasing in intensity. I still felt comfortable and relaxed.

The midwife arrived at 10am and I was 6cm dilated so in established labour. She got her colleague to bring the gas and air which I was ready for. That was really useful and the Hypnobirthing breathing techniques really helped to focus you on the breath through the surges.

After another hour and a half I decided I would like to give myself the option of doing what I’d originally planned and going into the Heath as the midwife suites were open again.  I felt I would like the option of an epidural should I feel I needed it. My midwife said it would be a non urgent ambulance transfer so might take a couple of hours for them to get to me by which point I might be fully dilated and be ready to push. We agreed we would call for the ambulance then assess my dilation again when they arrived and make a decision. I felt having options put me in control and my partner was there to advocate for me too.

The ambulance arrived at 1pm and I was still 6cm. I was starting to feel tired and not knowing how much longer it might take to get to the pushing stage made me feel like gas and air and the pool might not be sufficient for me to get to the end. I walked out to the ambulance and was basically in a bit of a trance. I couldn’t tell you what either paramedic looked like because I hardly opened my eyes for a few hours whilst focussing on my breathing and the visualisation.

I had the epidural once we arrived at hospital and it was exactly what I needed. I came around from feeling in a trance and could speak to my partner and the midwives. I could feel my body except for a band around my pelvis and could tell when I was having contractions but couldn’t feel pain. It enabled me to rest and having been at it for 12 hours the night I’d finished work for maternity leave I was pretty tired.

I was 7cm when the midwives broke my waters. They found there was meconium in them which would have put an end to my home birth anyway and been an emergency ambulance transfer, so I was pleased with my decision and didn’t feel disappointed about coming to hospital.

By 9pm I was at the pushing stage. I felt ready and had let my epidural wear off so I could feel where to push. I went back to gas and air. I was advised by my midwife to change my breathing to hold my breath to push but found this challenging. Instead I went with what felt natural and made noises on the effort rather than holding my breath as this had made me feel lightheaded. 2 hours 15 minutes later our little boy was out and we were in floods of tears. Pushing felt hard work but also strangely good. You can really feel the baby’s progress unlike with initial contractions and you could focus on being a push closer to meeting your baby each time. My partner found the pushing stage quite difficult because as an observer he thought it looked far more intense and painful than the previous stages. It wasn’t for me though. It was intense and it was physically hard but I didn’t feel the need for an epidural. I felt like I knew I could do it.

My partner was able to stay with us until 4am and then I went to a side room. I was discharged the next day. I didn’t tear so felt physically quite well. I really wanted to be home together.

I was very pleased with all my choices. I never felt panicked or concerned and the Hypnobirthing came in very handy. My partner found the same. All our midwives were very supportive.