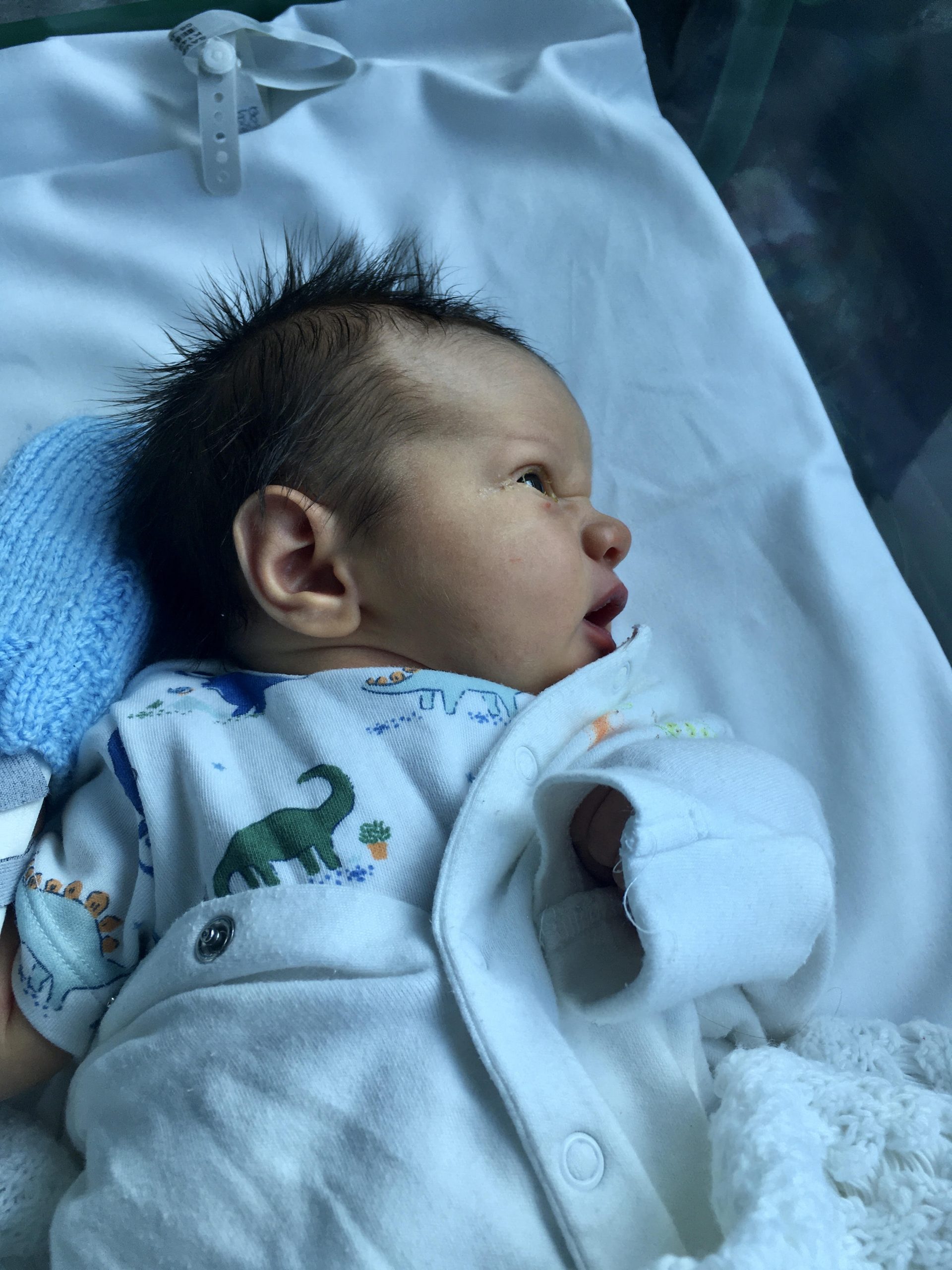 Mama D says – “I feel like hypnobirthing helped me to have pretty much the birth I wanted and to deal with the sticky situation that followed. I also think I’ll be able to use the techniques in other areas of my life – which might be useful in the future when dealing with 3am toddler rage!”

Hi Claire, our little boy arrived in early July at just over 39 weeks. He is our second child and his birth was very different to our first. I was induced for my first labour with our daughter because my waters broke before labour started. The induction worked quickly, and within 10 minutes I started to have regular contractions that were pretty strong. After about 12 hours I had an epidural and gave birth, with the help of some forceps, about 24hrs after the induction.

Whilst my daughter’s birth was a very positive, relaxed and lovely experience, it wasn’t the birth I wanted. This time, I was keen to try and have an active, water birth with minimal interventions that was done and dusted within 6 hours. Which almost happened!

In the days leading up to labour starting, I experienced the odd cramping and Braxton hicks type sensation. At about 1am on Wednesday morning, these cramps started to become more regular and a little stronger. I managed to sleep on and off until about 6.30am when my daughter woke up. I then got on with the business of the day and went for a short walk to see if it helped to ease the discomfort I was feeling. When I got back, I told my husband that I thought things might be kicking off. He immediately – and uncharacteristically – went into denial mode and insisted it couldn’t be the start of labour because the sensations weren’t going around to my back. Thanks Dr Google!

Around lunch time, I told my husband we should call his parents to take our daughter. He still seemed quite reluctant to admit it was the start of labour, but I convinced him that, even if I was experiencing Braxton Hicks, the intensity was getting to a level where I couldn’t effectively look after our daughter. He agreed and we arranged for my daughter to be collected after lunch.

The in-laws arrived about 1.30pm, just as my waters partially broke. I said goodbye to my daughter, strapped on the TENs machine and started bouncing about on my yoga ball. As my waters had broken, I also rang the hospital to warn them we’d be on our way at some point and they told me to call back when my contractions were 5 minutes apart and lasting around 1 minute.

It turns out that it wasn’t necessarily the induction that caused me to quickly fall into pattern of regular, strong contractions, that’s just the way I roll! The contractions quickly came quite close together but were short. By this point, I’d also developed painful PGP, which was a surprise as it hadn’t been much of a problem during pregnancy. Around 4pm I suggested we had dinner because I didn’t think we’d be home much longer and by 5pm I was having contractions every 3 minutes lasting 30-45 seconds. As this didn’t fit with the textbook example, I decided to phone the hospital to see what they suggested and they asked me to come in.

When I got to the hospital, the good news was that I went into a room with a birth pool – the bad news was that my husband couldn’t accompany me because of the Covid-19 restrictions. The midwife examined me around 5.45pm and told me that I was only 2cm dilated. I immediately started to feel a wave of exhaustion and disappointment but remembered that it was common for labour to slow during the journey to the hospital so I stopped myself from falling into a negative spiral and asked what this would mean for me. Because it was my second child, the midwife suggested that I could either stay in the hospital for an hour to see what happened or go home. I chose to stay for an hour. I let my husband know about the wait and the midwife left me to it.

I decided the best thing I could do to advance my labour was to relax. After practicing lots of lovely  visualisations, I ended up not using any of them and instead anchored my breathing to the sound of the air conditioning! I concentrated on using my breath and the TENs machine to work through the contractions – which were still coming around every 3 minutes. I managed to make myself so relaxed that I even briefly nodded off between contractions a few times. When the midwife came back to examine me around 7pm, I was over 5cm dilated and in active labour and I could call my husband to come in.

At this point I was really looking forward to the idea of a waterbirth as the PGP pain was getting unbearable and it was clear that I wouldn’t be having the active birth I was hoping for. Unfortunately, the midwife then told me that I had a temperature – which I wasn’t aware of – and that I wouldn’t be able to have a water birth as the combination of my raised temperature and the water would put the baby at risk of overheating. So, this time I got to give birth next to the pool but not in it! I was given gas and air and some IV fluids and my husband arrived at about 7.30pm.

From this point, my memory of what happened gets hazy. I continued to focus on my breathing whilst using the TENs and gas and air and went into a bit of a trance. The only thing I was concentrating on was breathing through my contractions. The next thing I was aware of was feeling the need to push. Just after the sensation changed, the midwife examined me again and said I was 9cm dilated and the baby was almost here. I managed to say “I need to push now” as the second contraction came and my husband reminded me that I want to try and give birth in an upright

position and asked if I wanted to move. Because of the PGP pain, moving was by far the hardest and most painful part of my labour, but with help from my husband and the midwife I managed to get into more of an all-fours position and began pushing.

I say pushing, but that’s not a very good way to describe it. I had been skeptical of the idea of breathing a baby out, but, that’s exactly what I did. Rather than consciously pushing, I just let my body do what it wanted to. Again, I’d been practicing lots of lovely visualisations and these went out the window – instead I imagined my baby moving down the birth canal with each push. After about 5 contractions I heard the midwife say the baby’s head would be out with the next push – I had one more contraction and my son was born at 9.04pm. I immediately fell out if the trance and he was handed up to me for our first cuddle. The second stage of labour was recorded as 8 minutes. We then sat and cuddled whilst I waited for the placenta to arrive. The birth was recorded as taking 7 ½ hours, so not too far off my aim of 6 hours!

The next bit is where things got a little tricky. I had a second-degree tear and I started to bleed from the wound. A Dr came in and, before I knew it, there were about 4 people in the room all talking to each other and second IV being was being put in my other hand. I started to feel panicked but stopped myself as I realised it wouldn’t help. Instead I asked the midwife to tell me what was happening and focused on my husband, who was holding our son, to keep calm. This was a scary moment, but I honestly think this is where the hypnobirthing training really came into its own. It not only gave me the confidence to ask the midwife to tell me everything that was happening, but also gave me other skills to keep calm in an emergency and to trust the medical team to deal with the situation. Thankfully everything was ok.  After that, my husband was able to stay with us until about 1am before having to leave (blinking Covid!) The baby and I had to stay in hospital for 6 days because my temperature in labour was caused by an infection that passed onto the baby, which was a shame, but gave me a good chunk of time to bond with my lovely little boy.

I feel like hypnobirthing helped me to have pretty much the birth I wanted and to deal with the sticky situation that followed. I also think I’ll be able to use the techniques in other areas of my life – which might be useful in the future when dealing with 3am toddler rage!

The “most amazing” experience